I did some reading in the supercavitation effect this morning.

Supercavitation is the underwater version of a faster-than-light (FTL) space travel method popular among science-fiction writers which involves creating a hyperspace bubble around a spacecraft.  Supercavitation creates an enveloping bubble of low-pressure gas around an object so it can move at speed typically associated with aircrafts. 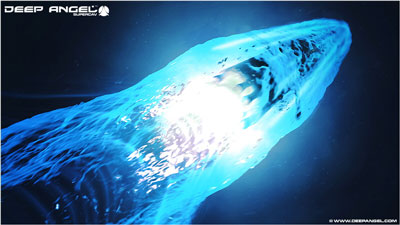 The human drama surrounding the technology is as fascinating as the physics behind it.  Russia, which had supercavitation torpedos for decades, supposedly exported them to some countries like Iran.  Iran?  I didn't even know they had submarines!

Ultimately, I think noise and operational hazards will prevent development of supercavitating submarines.  Supercavitation bubble imposes some navigation constraints and if a submarine moving at 200 mph can't avoid a whale or a school of tuna, we are talking pretty big repair bills.